So Much Great Data Your Head May Hurt

If you subscribe to Billboard Magazine, go to your June 1, 2013 edition and open it to the double truck full page of infographics ("Two Screens, One Broadcast") integrating stats from Nielsen minute by minute TV ratings and Attensity Media social media numbers created by social/streaming charts manager William Gruger after TV broadcast of the Billboard Music Awards.

Here's just a piece of it: 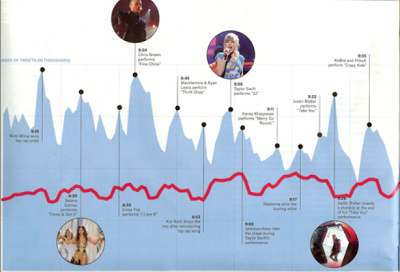 The red line is the estimated number of viewers in each minute in millions.  The dips are commercial breaks.  Right in the middle of the chart is 8:58 when Taylor Swift performed "22" and the next peak after that is Kacey Musgraves doing "Merry Go Round."

The black dots above the blue chart are the high points of the number of Tweets in thousands.

Ponder these questions:
Both.

Does this have anything to do with your radio show?

Posted by Albright and O'Malley at 4:44 PM

As a media researcher who has tracked the word of mouth generated by many advertising campaigns, I am excited by the impending launch of social TV ratings. Slated to come on stream in Q4 this year, social TV ratings should catapult the concept of TV audience ratings from a simple viewer measurement to a consumer response metric. Social TV ratings should provide a standardized quantification of consumers’ social media involvement with a TV program.

Nonetheless, in case we all become too rapidly enthralled by the specter of social TV ratings, let me also add “Not so fast!”