Arthur A. Hawkins II wrote a book on business effectiveness I bought in 1996.  It's out of print, I just learned when I attempted to buy a copy for a client, so I fear that this blog may be the only place you can get these tips:

Posted by Albright and O'Malley at 11:33 AM No comments:

Has A Listener Ever Called You And Asked Why You Don't Play More Women Artists' Music?

I doubt it, since music testing has been an industry standard for at least 40 years and major market country radio's music selections have been based weekly current/recurrent callout and gold tests for all that time.

When ranked by "total positive %" with all of the men who participated (screened for their heavy use of country radio), not one song by a female ranked in the top 100.  There were three in the top 150.

Distaff artists do better with the female listeners in the sample.  Eleven songs ranked in the top 100.  The highest ranking song by a woman is #29 (Lady Antebellum/I Need You Now) and then #33 (Miranda Lambert/The House That Built Me).

Billboard's Tom Roland must have been talking to Nashville music promotion folks for his article this week, "Taylor, Carrie, Rosanne, Julie: So Many Women, So Little Airtime." 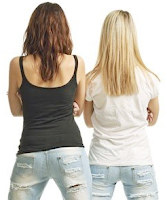 It's my experience, the only people asking programmers why they don't play more female acts are music promoters.


“I just want more girls to have more success,” Music City songwriter Hillary Lindsey told Roland. “It’s just been so hard to break them in this town, and I don’t know why. Why is it that guys succeed a lot more than women? Why is it that Tim McGraw can still be selling tons of records and having hits, but Faith Hill can’t? Or Martina McBride? Why is it that women age in this business and they go away, but men can keep getting old and do it?”


The Billboard writer points out that "Lindsey’s point has merit, though to be fair, most male acts don’t have shelf lives that are all that long either. Plenty of other men have appeared and disappeared during the nearly 20-year span since McGraw’s first hit, “Indian Outlaw,” debuted on Hot Country Songs on Jan. 22, 1994. And McGraw still has another decade to knock out before he can approach the 30-year span between Reba McEntire’s first top 10 single, 1980’s “(You Lift Me) Up to Heaven,” and her most recent No. 1, 2010’s “Turn On the Radio.” favorite."

That must have hit a nerve for Terra Lindsey, JRfm/Vancouver Promotions Director, lover of country music, cheerleader for female singers and a big part of the station's weekly music meeting.  Her passion on the subject is demonstrated not just by the length of her blog in response to it (click the link to read it), but also the depth of her argument, ranging from human evolution to female biology.


"Women see themselves in the songs. She may or may not see herself with the actual singer, but it certainly increases the taste for the song if the singer is yummy. If a woman is listening to a female singer, she wants to picture herself AS that woman. To do that, she’s got to relate to the lyrics (because it’s all about the story in Country music), as well as like the singer.  To “like the singer” means more to a woman than it does to a man.  For guys she just needs to be hot.  Women need to see themselves in another woman to be able to look at her in a positive light. This means she needs to know something about her, something that reminds her of herself."


Another possibility:  women are very complicated.  Men are simple.  Or, young girls' first radio format of preference as they turn ten or eleven is Top 40, which can be very successful targeting only women, so when they turn on to country, that is their first experience of listening to a radio format which doesn't target only them.

Millions of them grow to love country music, they see themselves as potential stars just like Carrie and Taylor, come in droves to Nashville with their self-involved perspective and run head long into the fact that Top 40 music is about fantasy and escape from reality while country music deals with adult realities, must be relevant to a wide demographic of not just their demographic peers but also to a "family" that spans four to six generations.

Perhaps it's this simple?

Posted by Albright and O'Malley at 3:16 PM 2 comments:

Clear Channel has had a lot of success over the years with "The Bull" brand, so I certainly don't  begrudge their decision to change what had been a winning country image in Las Vegas for almost 24 years to be something "new."

Dittos with last January when Alpha converted 98.7 in Portland, due - I assume - that they felt that 1 + 1 didn't add up to "Couple" anymore.

Having worked for those two radio stations for a combined total of more than thirty years starting when they each dominated their markets under those now-ineffective names, I hope no one thinks that what's going on is just renaming a radio station whose ratings aren't what they used to be.

Study how different the programming is under the new brands.  Spend some time listening to Las Vegas' BULL and Portland's BULL.

These days a brand isn't a name or a music position.

That's the bow on top of the package that may tell the recipient "open me first," but a brand that works is defined by what's inside the package.

A radio station starts to lose, not because it's name wasn't right.  Winning occurs because the radio station consistently engages listeners with talent who not only meets their perceived needs but constantly surprises, wows, by exceeding them.

Otherwise, it's just a bunch of bull.
Posted by Albright and O'Malley at 2:28 PM No comments: 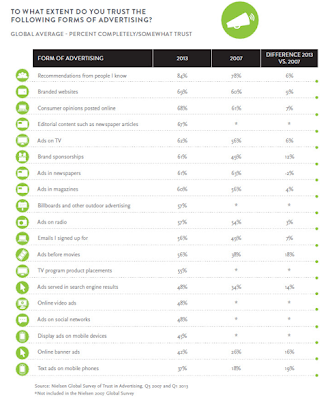 Consumers’ trust in radio is on the rise.
Posted by Albright and O'Malley at 6:12 AM No comments:

With the approval of Nielsen's takeover of Arbitron, it's dubious that anyone thinks that broadcaster costs are going down anytime soon.

So, since it's fait accompli, let's at least inventory what I hope we all get for the money.

First, thanks to Wired's Tom Valderbilt, some history:


In the years after its founding in Chicago in 1923, the A.C. Nielsen Company thrived, thanks to a commitment to math and technology. While its competitors called random households and asked them what they happened to be listening to on the radio at that moment, Nielsen developed more sophisticated sampling methods. Rather than rely solely on self-reporting, Nielsen employed a device called the Audimeter that used photographic tape to automatically record listening activity. When television arrived, Nielsen used similar meters for viewing—although they were supplemented with paper diaries. But by the late 1950s, Nielsen sat comfortably atop the media-ratings industry. It had few competitors, and since television habits remained static, it had little reason to keep innovating.


Under the terms of the FTC’s approval, as Variety Digital Editor Todd Spangler reports Nielsen must continue to support Project Blueprint, the cross-platform project measuring TV, radio, PC, mobile and tablet engagement that ESPN has been working on with Arbitron and comScore, so perhaps Nielsen CEO David Calhoun's statement (“We are looking forward to providing all of the benefits of the combined company to our new clients in the radio industry and their advertisers, driving incremental value for them as well as our shareholders.”) means that we will all be getting more for the money, better, more reliable data to reflect a more mobile media world.

Skeptics abound, so all eyes will be on Nielsen, starting, perhaps this week, at AdWeek 2013.

After a late 2008 announcement that 50 Cumulus markets were to be measured by Nielsen and a revelation 18 months later that Cumulus CEO Lou Dickey was pleased with the results, the industry never actually saw that public release of the data which was promised, first in June of that year, then later in August and then ultimately Cumulus did not renew their deal with Neilsen, so you'll pardon me if I am fearful.

In February 2010 at Country Radio Seminar, Clear Channel Senior VP/Research Jess Hanson and I attempted to get representatives of the two ratings giants to "take the gloves off," but it turned into a gentle confrontation as then-CEO of Arbitron, Michael Skarzynski ended up a no-show, replaced by the able fencer Dr. Ed Cohen, but Nielsen Media Research's managing director for North America Lorraine Hadfield was ill-equipped to talk competing methodologies with the experienced researcher and stuck to her talking points, meaning that what was billed as a barn-burner actually turned into a good session to catch a nap, which is probably the way both of them had hoped it would be.

Ultimately, as Wired's Vanderbilt wrote, if I may adapt and paraphrase him a bit: "It all adds up to a potentially thrilling new era for radio, television and new media, one that values shows that spark conversations, not just those that hook us for 30 minutes (for TV and just 11 PPM minutes for radio). The stakes are high: Get it right and great programming will continue to thrive. Get it wrong and both the $70 billion television industry and the $16 billion radio business will be in jeopardy—along with your favorite radio station, personality and TV show."

Hopefully, Neilsen makes the most of their huge investment in the future of all U.S. media ratings by improving the value of what they deliver to clients and media buyers .. and wastes no time in doing so.
Posted by Albright and O'Malley at 2:27 PM No comments:

How To “Make Things Happen”!