Your Heart And Your Skin On Too Many Commercial Units

Fire up your printer.  I am about to share a study with you that you're going to want to keep in your top desk drawer.

But, first, a quick tip of the hat to two academics, Dave Allan and Rob Potter.

Back in 1997, Dr. Allan published “Comparative Effectiveness of 30- Versus 60-Second Radio Commercials on Recall and Rate,” in the Journal of Radio Studies.

For example, here's what your heart looks like on too many commercial units: 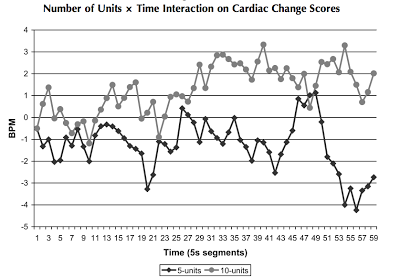 Potter notes that general managers and sales managers in the wake of Clear Channel's "less is more" initiatives which started almost a decade ago now "may be tempted to double the number of commercial units while keeping the overall duration of their advertising breaks consistent."

This study investigates the effects of such a decision on listener perceptions of advertising clutter and engagement to persuasive messages in the commercial breaks and the results document that the number of units matters.

To put it scientifically:  "Automatic orienting brings the listeners back to the task of processing the message, and because the message is new, they spend at least a brief amount of time processing it in order to make sense of it.  Therefore, it is expected that in the early portion of a commercial break, having more, and shorter commercials will increase cognitive effort spent on the processing of the advertising break. However, it also follows that each time a listener orients to the onset of a new commercial (recognized through the presence of an entirely new announcer, perhaps new music, and new semantic content) it increases an awareness of how many sequential commercials to which they were exposed.  As awareness that the number of sequential commercials is increasing and reaching a total that is quite high, media users may become more likely to tune out. If the physical ability to tune out is not available, listeners may mentally disengage from processing the persuasive messages."

The next time your boss comes into your office asking you to add units, toss this phrase back in their face "Lang’s Limited Capacity Model of Motivated Mediated Message Processing."

And, if that doesn't drive them away, click on this pdf of Potter's 2009 research and tell them not to come back until they've studied it thoroughly.

Finally, if they still don't get the point that adding units drives listeners away, you can show them what your skin response looks like on too many irritants ... like their harmful requests to add units!

Posted by Albright and O'Malley at 6:26 AM