During the CRS 2013 session "PPM: 5 Strategies for Recall Markets" (an idea and data-packed session well worth buying the CD for if you missed it) both Jeff Garrison and Scott Huskey agreed it's almost impossible to overplay the biggest hits.

This isn't the first time I've written about this, but it's worth revisiting since "too much repetition" remains a consistent complaint from country radio listeners.

Using Pinnacle Media's "Online Tracker" here's how a typical station's ultra core heavy users responded this week as they were asked after hearing a song hook whether they wanted to hear every current the station was playing "more" or "less," when ranked by the highest "play less" scores in the test: 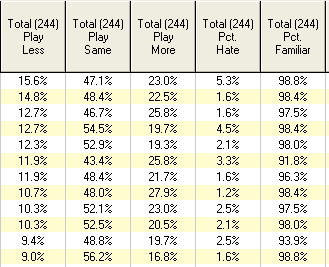 If you hear "too much repetition" from the folks who listen to your station an hour a day or more, I think that what they are really saying is that the don't like some of the songs you play.

High passion + low dislike = songs they want to hear more!
Posted by Albright and O'Malley at 5:06 AM