A&O&B works with all parties involved in yesterday's huge transactions and so all of us have been busy counselling buyers, sellers, executives, employees, all longtime coworkers at broadcast groups, radio stations and networks we have come to love and admire.

Mergers and acquisitions require adaptability and change.  Mark L. Feldman and Michael F. Spratt wrote the book on the subject back in 1998.


"Increasingly, the companies that win are those that learn faster, act quicker and adapt sooner. They will compress time by making and executing early, informed decisions about economic value creation, ruthless prioritization and focused resource allocation. They will use these decisions to take early firm stands on management deployment, organization structure and culture. Their actions will increasingly be linked to long-term, sustained economic value creation."


As someone who manages or works for one of those companies, you know intellectually the truth of of that paragraph, yet your individual needs and fears add relationships and emotion to the personal calculus which can work against getting what needs doing done.

I have another time-tested book I recommend that everyone read at least once a year which helps me with that process.  @ParachuteGuy Richard Nelson Bolles is now semi-retired, but his work goes on as the need is greater than ever.

Recent graduate of Villanova Law School Andrew Dellaripa blogs that it's important to be cautious about giving advice in situations like this:  "Good advice sticks to your very soul. The kind of advice Obi-Wan’s ghost gives.  Bad advice, though, is outdated, archaic clichés pulled from large-font posters of cats in baskets."

So, I'll go light on advice for you except to suggest that this weekend is a great time to think about your own personal goals, abilities and career.

The clearer you are on what makes you succeed the better communicator you'll be when that new leader you'll be working for begins opening up about your new role.

If you need a mentor to help with this process please reach out to any of the A&O&B team.

Your success is our success.
Posted by Albright and O'Malley at 10:47 PM 1 comment:

Did You Do A Summer Listening Contest?

With Inside Radio's report yesterday that Arbitron is running seasonal sweepstakes programs during the August and September ratings periods to help encourage panelists to wear their meters it's a good time for a reminder emulate the radio ratings giant.

ARB has long made use of radio's direct marketing experts as consultants to help them improve response and cooperation rates.

What they learn can be a great primer for you as well (staying well within the rules of course!).

Arbitron's current program started this week and runs through September 8, following sweepstakes that took place from July 22-28 and August 5-18.

“These programs are expected to have a positive impact on In-Tab rates,” the company says in a note to subscribers.


It’s the time of year when a lot of normal life patters are shaken up,  and that includes people meter panelists, as Inside Radio's story notes.

If your station does online music testing, unlike ARB or BBM, you actually need to be doing two contests:  one, silently, to encourage participation in your own survey, thanking your listeners for doing it for you.

And, of course, a second one on air (that's bigger, easier and more fun than your competition) designed to increase daily cume and daily occasions.
Posted by Albright and O'Malley at 5:38 AM No comments:

He's an accomplished songwriter, musician, author, producer, publisher, and manager who since he started Cupit Music back in 1980  has won awards for his songwriting talent from BMI and ASCAP, including the millionaire award for his writing contribution to "Jukebox Junkie" as well as the Tennessee Songwriter's Association Hallmark Award. 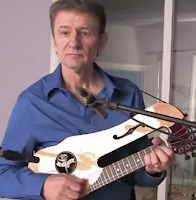 Idea #2 is "Guitars For Soldiers," an organization dedicated to donating guitars to all military personnel  desiring a small travel guitar.  Soldiers become eligible for a free guitar by simply entering their information at www.guitarsforsoldiers.com.  Civilians & Corporations contribute by donating one travel guitar at the price of $399.00.  Cupit Music will then match the donation with a second guitar to a second soldier  in the donors name.

For questions and all other inquiries please contact:
Dan Hagar
Senior V.P. Cupit Music Group  Nashville, TN
615-731-0100 ext.13
dan@cupitmusic.com
www.cupitmusic.com
www.guitarsforsoldiers.com
Posted by Albright and O'Malley at 10:05 AM No comments:

Singing In Unison With Mark Lapidus

Any radio column that concludes with the recommendation to begin practicing this simple but powerful phrase: “Starting January 2014, we will stop giving away advertising of any kind, online or mobile. Instead, we will use these precious assets to generate money for our radio station” gets a "second" from me.

The Radio World promotions writer last week created a list of long-overused vehicles for mentioning client names along with routine programming elements, but the title of the article - Put Ads In Their Proper Place - rings my chimes.

Radio has no shortage of places to drop the names of advertisers within the context of what we do and listeners turn up the volume to hear.

The key question is:  are you getting enough money for the ones you currently do?  If not, why wait until January to do the right thing?
Posted by Albright and O'Malley at 3:03 AM No comments:

Seeing With Your Mind's Eye. Are Drop In Ads Spoiling The View?

Thanks to Blaine Thompson at Indiana Radio Watch for spreading the word on this from CNN:
Stop for a moment, click the link and ponder the ramifications:


It shouldn't be surprising that this is happening. Baseball has always been a relentlessly and unapologetically revenue-seeking enterprise. Have you ever seen photos of the outfield walls in big-league ballparks in the early to mid-20th century? Even NASCAR's marketing strategists would have been envious of the don't-waste-an-inch commercial clutter.

"How good can it get? For a gold-standard example from the history of the sport and of the medium, listen to the KMOX radio broadcast of Stan Musial's final at-bat for the St. Louis Cardinals before his retirement."


"Take a good look, fans. ... Take a good look.  It's possible, on summer nights, to see most clearly with your eyes closed."
Posted by Albright and O'Malley at 5:59 AM No comments:

Running Mediabase's "five day" chart on a Saturday is a weekly habit with me.

Seeing Monday-Friday spin rank without the distortions of weekend airplay can be a good indication of next week's label priorities. 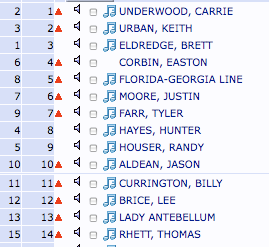 For example, it already appears that next week's #1 is going to be Carrie Underwood and then the likely chart-topper the following week will be Keith Urban.

With this week's #1, Brett Eldredge heading downward in spins after taking 44 weeks to top the spin charts, will Easton Corbin have the staying power to be all powered up the week of 9/2 for a #1 on 9/9?

You can be sure that his advocates are already battling for that place on the ranker.

As of this week, "All Over The Road" has been on the charts for 33 weeks (which seems like a youngster compared to the 56 weeks it took Lee Brice's 2010 debut "Love Like Crazy" to ultimately get only to #3.

Since radio power rotations are usually five to seven songs, the actual difference from radio's perspective between a #1 and a #7 is just a few spins per week on the average monitored station.

Don't tell that to a promotion person!

The best ones play the game weeks in advance, creating strategies and tactics designed to outrank competing artists, publishers and labels, all of whem have plenty of skin in the contest.

Is it just Bob Struble and me?


A&O&B has been chronicling the tortoise-like pace of North American radio's movement toward digital in this space for many years.  (click to read eight years' worth)

I suppose the fact that 61% of Inside Radio readers now see a "tipping point" somewhere in our medium term future is a positive sign.

There was a time when FM seemed like an uphill battle too.  HDRadio is our best hope for a big place in the coming digital dashboard.

Don't give up on it.

New Gold Has More Than Just A Familiar Sound