Radio Is The Internet's "C Student"?

Wall Street Journal reporter Sarah McBride writes that more than 42 million people each week listen to radio streamed over the Internet, more than double the rate from five years ago, according to Edison Research and Arbitron.

Many of those are either new listeners or people tuning in at times when they never listened to regular broadcast radio. 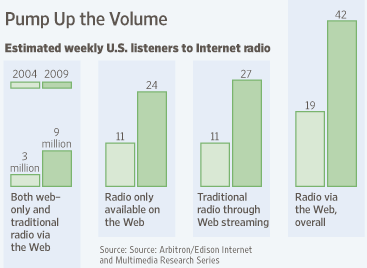 But radio has been slowest among the media industry to turn its Internet audience into cash. Gordon Borrell calls radio the "C" student of the Internet. Radio gets only an estimated 2.4% of its revenue from online, while TV gets 3.4% and newspapers 7%.

For the clients that do pay for Web commercials, radio companies haven't been able to command much in the way of rates. Advertisers who buy on streamed radio typically pay about half the rate per thousand listeners that they do for regular broadcast ads, media buyers and radio executives say.

Charitably, I guess you could term that "growth potential."

A clue from one of streaming media's A students: tight control on inventory is one of the reasons Pandora is on track to eke out its first quarter of profit in these last three months of this year, says chief operating officer Tim Westergren. He expects full-year revenue of about $40 million.

Many listeners to online audio are tuning in to Internet-only services such as Pandora Inc., which typically play far fewer ads. Pandora offers only a fraction of the ad time on digital streams of regular radio stations. "They're trying to keep it clean," says Kathy McLaughlin of planning and buying firm Media Spot Inc., which means Pandora can command high prices.

In recent research she did for a client who wanted to target Los Angeles listeners, Ms. McLaughlin found that buying spots on Pandora cost 20% more than buying regular over-the-airwaves radio spots in the city, one of the most expensive ad markets in the U.S.

Posted by Albright and O'Malley at 2:34 AM

We should try that in radio!

Steven Saslow: make a medium easy to buy and accountable.
demonstrate easy to understand schedules and an attitude of what you buy is exactly what runs
add promotion and have a sales staff that understands how to communicate the value of the stations audience .......not in ratings terms but qualitative easy to understand terms....
start selling both on air and on line with production crews to produce good quality commercials......
manage inventory with known price floors, no give aways........ do you think that might work?

A great station should not be difficult to sell, whether terrestrial or on-line. Of course decreasing supply commands increasing prices. Cut the inventory, charge more per spot, and overall revenues should increase. That cleaner product will be easier to sell, promote and program. If spot load is inversely proportional to audience size, and audience size is proportional to potential revenue, then it becomes a simple equation:

If you are able to reinvest that extra revenue in local and live talent, you should be able to keep ramping this up to some theoretical maximum.

On the other hand, if increase revenues simply enrich string-holding investors, then why bother?