Before celebrating the average daily time spent listening of AM-FM radio in 2013 of two hours let's also dig into their archives from the Arbitron days for a historical perspective.

Of course, a decade ago all of the data was diary survey based so comparing "then" to "now" is apples vs oranges, since if we had national PPM data in 2003 cumes would have been higher and hours tuned would have been lower given the differences between top of mind measurement vs actual usage tracking.

Nonetheless, it's worthwhile just between friends to contemplate the biggest change in radio over the decade: 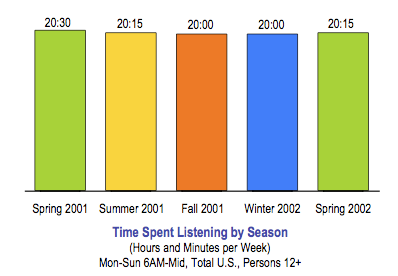 It would be an oversimplification to focus solely on the 30% loss of time spent listening to all radio documented by our largest ratings company over those ten years, but it's clear that this is no time to be complacent about usage of our medium.

All of us who create today's "radio" are in a battle against time!

We are in a fight for every minute, every listening occasion, every day of our users' increasingly precious time - by giving them more and better than their other choices.

Or the trendline over the coming years will continue to be a downhill slide.
Posted by Albright and O'Malley at 4:50 AM

As usual, a stimulating and thought provoking observation, Jaye. We all know what the TSL issue is. Whether we want to articulate that to our corporate bosses (and clients) is another thing. - Bob McNeill