In 1992. KNIX/Phoenix had a yearly four book average market-leading 11.5 share, driven by a 25 cume rating.  Arbitron estimated at the time that more than one in four people who listened to radio used KNIX, which had a very strong competitor in KMLE, whose cume rating was a more normal 15.8 and average quarter hour 12+ share was a yearly average 7.0!

How did KNIX engineer such powerful market shares in spite of having a really good competitor?

Normally, it's almost impossible to get a totally unbiased, data-driven answer to that question in real time because the owners, managers, programmers, consultants and researchers with the perspective to know the answer are bound by confidentiality since an ally in one situation may be the competition in another.

Phoenix-based researcher-consultant Todd Wallace has done hundreds of perceptual research projects throughout the U.S and Canada but because they are conducted exclusively for just one client in a market, he still cannot share that confidential information with anyone else.

Back in the 90's, several of the biggest radio stations in Phoenix subscribed to a syndicated version of his "Radio Index" service which provided weekly ratings tracking and a series of Positioning Questions covering all manner of subjects, 44 different viewpoints, including an Annual Report which summarized all of the monthly PQ's sizing-up the entire radio marketplace (with a sample size of over 15,000 completed interviews each year).  Fortunately, two decades later, he is now able to share those results.

Though the numbers and market situations are dated the principal remains useful in helping you gain some perspective on great ways to examine the audience at large and in-target. 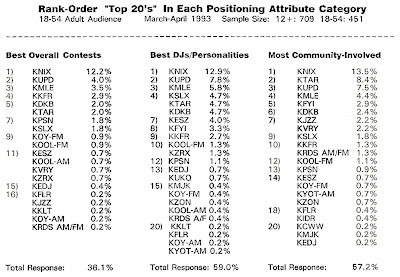 At the time, KNIX dominated three non-music positions - not just in the minds of the country audience, but with all radio listeners!

In fact, in this major market with many very aggressive broadcasters, KNIX did what it took to give away huge prizes, cash and contests so that no other station came close.  Their lead with "best DJ's" and "most involved" wasn't as incredible as their ownership of best contesting, but even in those two images they were head and shoulders above not just their direct competition, but all other radio stations with the entire listening audience.

Ponder this as you plan to 2014:  what might you do to dominate key usage-drivers?