One More Surprise (Thanks To RateTheMusic.com)

It its screener, RateTheMusic.com asks respondents how much they listen to country music radio every day.  The folks who say they listen two or more hours daily are 79% of this particular week's sample and the ones who report listening less than two hours are the remaining 21% (talk about a perfect example of the Pareto principle!).

This is important because high performing stations have a higher proportion of “P1” listeners than other stations (P1 is defined as the station that earns the most time from a listener). 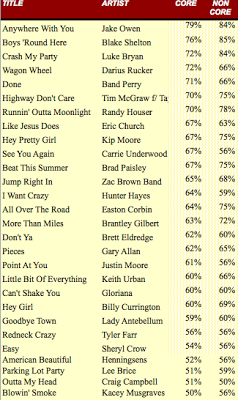 The decisions being made each week by smart programmers on factors like these show why programming music is both an "art" and a "science."

It starts with understanding the differences in the many subsets within your audience and then making intelligent decisions based on them.

Posted by Albright and O'Malley at 7:38 AM