Am I Good Enough?

Insecurity plagues us all.  And, who hasn't stepped on a vocal, rambled on too long about something you knew was going nowhere and ended a shift saying, "that was the worst show of my life!"?

Later that same day, a listener recognizes you at the grocery store and tells you how terrific today's show was .. because you just happened to play their favorite song right when they got to work and turned the radio on.  They wanted to know who sang it and you related the title and artist right after it ended, precisely when they wanted that info.

This is a lesson in expectations and perspectives.  What we expect from ourselves is not the same thing as the average listener expects.

Take it easy on yourself as you critique your work.  Get on base every time to come up to bat and stop trying to swing for home runs.  Make it sound effortless and have fun.  Give listeners what they come to radio for.

Once you can do that consistently, you're "good enough."  Relax and live there.

However, to build a "better than good enough" reputation, the next step is to be occasionally great.  Meeting and also exceeding expectations is what makes a talent stand out from the crowd and drives consistently great levels of daily listening occasions.

Ron Chapman at KVIL/Dallas must have had one of those "am I good enough" moments back in 1988 when on March 31 he asked listeners to send him $20.  $244.240 later, he and his audience made a meaningful donation to local charity.

It still works.  Classical KING-FM/Seattle, newly incarnated as a community supported classical music station, just asked its audience to help them qualify for a Bill and Melinda Gates foundation grant by donating to the station.

7,000 listeners got out their checkbooks, giving a total of $1.8 million in just a couple weeks. 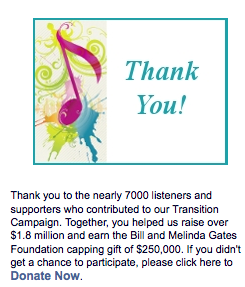 Could you do something like that?  How would your audience respond?

More than good enough, I predict!
Posted by Albright and O'Malley at 9:23 AM

I wanted to drop a note to say how much I enjoyed your "Am I Good Enough" blog entry.

Yesterday was "one of those days". I am still a part of the morning show, from 6a.m.-9:45a.m. and then I fly solo until 12noon. I stepped on more intro's yesterday than I have in the last year.

A stop at the local grocery store on the way home and I ran in to a lady that just loved that I played the new Zac Brown Band song and how that made her day.

Funny,isn't it? I had beaten the heck out of myself and one song made her day.

Good to keep things in perspective. Hope you have a wonderful day.