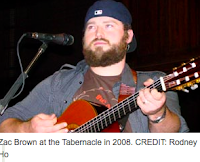 And, Atlanta journalist Rodney Ho attempts this week to answer it (click to read his article on radio's reaction to "Toes" lyrics):

Wyatt Durrette, one of the four co-writers of the song, wrote to me in an email:

“I’m ok with the toes-toes thing. If people like the song, they are going to buy it and they end up with the real version. So while it’s not the greatest, it’s not the end of the world either.”

Scott Lindy, program director at the Bull, tested the song with the “ass” word included a few weeks back but feedback made him decide to stick with the G-rated version during the daytime when more kids are in earshot. One person said whenever the song started while he had young children in the car, he’d switch the station immediately. This is not something any program director wants to hear.

Kevin Daniels, operations manager at South 107.1, which covers northwest Georgia, said he remembers having a conversation with Zac, who told him he did not want an edited version on radio, that he’d rather it not be played at all. In fact, Daniels has not heard about a specific radio edit from the label.

“I was hesitant at first to play the song,” he said. But so far, so good. He has not gotten any bad feedback from his audience about it. In fact, he’s gotten some compliments from folks who are happy he is playing it without any changes. Right now, the station has “Toes” in medium rotation of three spins a day. “I like the song and the audience seems to also,” he noted.

Jaye Albright, a country station consultant out of Seattle for Albright and O’Malley, said she has heard more complaints from Zac Brown fans who object to the censorship.

“When radio starts to edit or tamper with a song, there’s a little bit of artistic protection from some listeners. They’d rather hear it the way the artist intended.”

Plus, some programmers in more conservative areas are more wary of the use of the phrase “roll a big fat one,” implying the smoking of an illicit substance, over the “ass” line.

Posted by Albright and O'Malley at 3:16 AM

I'm not playing it. It's gratuitous and unnecessary. Out of all the words they could have chosen, the a-word was the best one? Appalling. There are just two other family-friendly options on the radio in Tucson, and I want to stay on that list.

The edits are not very good, production-wise.

I love the Zac Brown Band and will support them in the future, but I'm disappointed in this choice for a single.

Buzz, I'm in Tucson lots and love your station but you are dead wrong about this song. Great tune!

Become a fan of Karen Scott Radar on Facebook and see the strong reaction about playing the edit version of "Toes". It's also a topic on this mornings show.