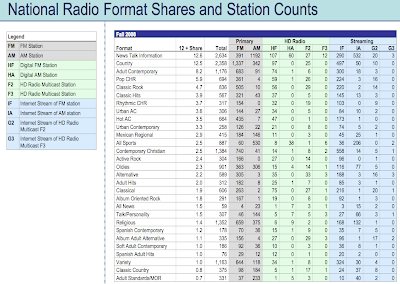 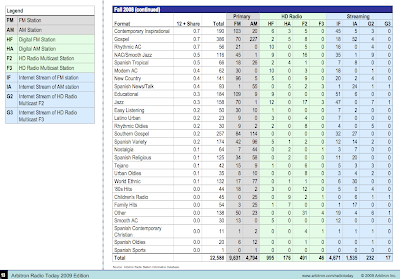 Last week, ARB released the first Radio Today update in two years, and added lots of great information on who uses as many as 57 different radio formats, where, when and how. 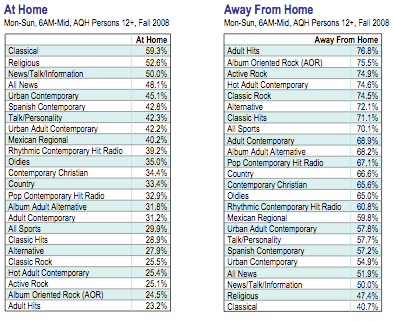 Then, just a day later, the company in association with Coleman Research put out another report looking at America's Most Successful stations and formats in PPM.

Unfortunately, it appears to purport that all but perhaps ten of those formats aren't going to drive enough cume to do well in metered measurement. Their lower cumes aren't large enough to consistently penetrate the smaller PPM sample. The great TSL and high loyalty which drove their success in diary measurement no longer registers as important to doing well in PPM methodology.

Shares no longer count very much, we are now told, since in PPM the majorty of lower cume stations all cluster together at the bottom of the new ranker, separated by small fractions ... which comes as quite a shock to many sellers and buyers who have become accustomed for four decades to using that metric to value the medium. 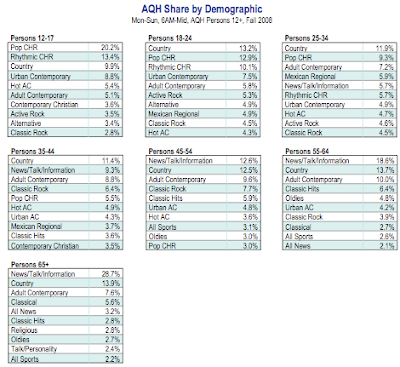 I am now staring nostalgically at these format performance indications from diaries, fearful that future "Radio Today" reports - as more markets drop diaries and move to PPM - will exhibit the disappearance of many mid-rankers, as they go from viability to financial starvation (unless they can find a way to grow a lot more "cume" - read that "get more meters of their heavy users in the sample" - and fast!).

By and large, PPM is treating Country well, but even our most successful stations in PPM have more cume and get many more listening occasions from their heaviest-users than the average does. Is this because their brands are stronger? Their execution is better?

Or, that they just were lucky enough to get meters into the hands of their listeners? 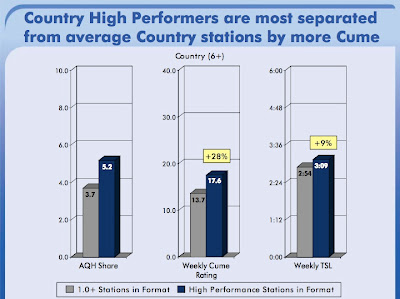 The rub: in highly-ethnic markets, the format gets very little cume from all but non-ethnic households, which can have "cume" (or, more correctly, number of meters) ramifications for both us and minority broadcasters. 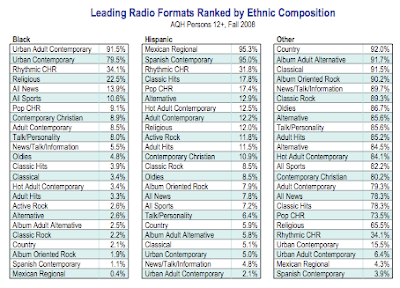 How's this for an idea?

Since Arbitron is now saying that it plans to also measure "engaged" listening as well as "exposure," - which so much of PPM cume is - simply do one diary-based survey per year with a robust sample in every market so we can all rely on the accuracy of the audience shares of the engaged audience we have all come to trust and buy from for decades, and then, for those who want more accountability, track the behavior of individual station and format users, without trying to pass that much smaller sample off as an accurate measure of the size of average quarter hour audiences of stations with less reach and more loyal listeners.

Who says we have to choose between measuring exposure and engagement?

Can't you measure and compare both for us, please, Arbitron?

.. Just as you did so well in the last week.
Posted by Albright and O'Malley at 5:31 AM