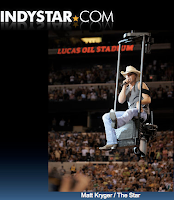 It all ended with an audible in Indianapolis… After Sugarland's Jennifer Nettles came out for “When The Sun Goes Down…” After Miranda Lambert came out and camped on “She Thinks My Tractor's Sexy…” After Zach Brown and his band blazed through Alabama's “Dixieland Delight” and Steve Miller's “Space Cowboy,…” After Wailer Drummie Zeb romped through “Three Litrle Birds…” and No Shoes Radio Mark Tamburino ignited “Girl Gone Wild…”

It came down to Kenny Chesney, his acoustic guitar and the tugging “Better As A Memory,” with its confussion “Every good-byes like a roulette wheel, never know where it's gonna land.” The Star called it “his most personal moment…” and deemed it “an emotional challenge he almost didn't get through,” and yet the fans stood, cheered and waved good bye to the man who's come to represent summer, what it means to be young and someone who's just like they are to over a million people each of the past eight years.

“It's hard to believe we're putting this thing up on blocks,” an emotional Chesney said after the sold-out show at Lucas Oil Stadium. “The response from the fans, out in the crowd and the internet, it makes feel like people understand… and that they know we're not gone for good, it's just a breather…

“And I hope people understand, I've never been an all or nothing kind of guy. This doesn't mean there will be no shows or no music. It means I'm not going to be staging a major tour - I'm not going to take two weeks off and be meeting with people to build a stage, to start thinking about how we can do the lights different an what the video's gonna be.

` “This isn't just a show,” explains the man who's the 4-consecutive Academy of Country Music and 4-time and current Country Music Association Entertainer of the Year. “This is a major production… and it's not just decide what to play, rehearse for a couple weeks and get out there. I need a break from that, so I can get back inside from a fresh place - and I'm really looking forward to that, because I don't anyone who keeps their foot on the gas like this for 8 years, “

Look for Chesney to be part of the Hard Rock Café's international Ambassadors of Rock next year, as well as continuing to record a new record for late spring release. With “I'm Alive,” Chesney's cross-genre duet with Dave Matthews, climbing the charts, it is certainly a musical time for the singer/songwriter from Luttrell, Tennessee who found himself the first face of Cornoa Extra when his t.v. commercials hit the air earlier this year and his “This Is Our Moment” is currently the break-out song for ESPN's college football games this season.

“There are all kinds of things to explore within the music,” Chesney enthuses. “I can't wait to take the time to see where some of this will take me, and where I might turn up, Because, you know, I now have the time to maybe get into some interesting places… We'll just have to figure it out.”