Two-thirds (66%) of Americans aged 18-34 show an active interest in the pause-and-rewind feature of the new FM tuner. The interactive features of the FM tuner in Apple’s new iPod Nano show potential to energize interest among younger demographics who are the heaviest users of mp3 players. 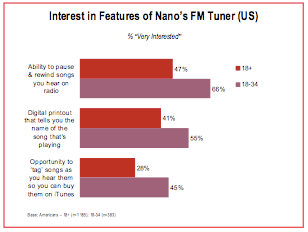 This is one of the main findings of an online survey of 1,185 American adults conducted by the Radio Research division of Vision Critical Communications. Parallel surveys were also conducted among Canadian and British adults showing similar results. The interactive features of the FM tuner generate considerable interest— particularly among 18-34 year-olds. When presented with the specific features of the FM tuner:
Of the five features from the new Ipod Nano that were presented in the survey, American adults rank an FM tuner #3 in terms of overall interest.

American adults in general show greater active interest in the Nano’s larger display screen (with 46% indicating they are “very” interested) and the new video camera (45% “very” interested) than in an FM tuner (34%) when the tuner is presented on its own prior to mentioning its specific features. Interest in an FM tuner is however well above the active interest expressed in the voice recorder (21%) and the pedometer (17%).

Full survey results by demographic category and country are available on request here.
Posted by Albright and O'Malley at 3:25 AM

..And if there is a tuner in a Nano, the iPhone won't be far behind. THAT would be big. Think "Radio Apps".

Think Portable Device Tsunami...if it can get 3 or 4g internet it can get YOUR station (it becomes so much more than a "radio" station" Phone, I can't get just a 'Phone" it's always a device.

Good find, Jaye. The tuner adds convenience and sexiness to radio again. Bought one for my wife the day they became available!