More From Strata: "At what point do you see the economy and your business returning to a strong growth period (if not already)?" 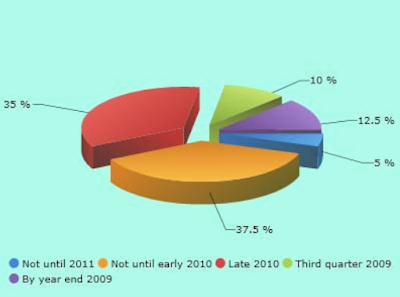 The top concern remains client spending which was the main challenge in the first quarter and up 138% since the end of 2008.

Back in 2008, client attrition topped the list of agency challenges. But when asked when they felt the economy was going to return to a strong growth period, there was a 67% increase of those who felt the rebound would come by the end of this year.

This could be evidenced by the fact that 15% of the agencies plan on hiring this year, and 80% plan on no reduction in staff.

72.5% of the agencies saw their clients either making minor cuts or cutting back considerably from their spending in 2008.

15% of agencies say that that their customers are most focused on Spot Radio (a 500% increase since the end of 2008)
Posted by Albright and O'Malley at 5:02 AM