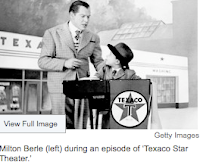 Wall Street Journal writer Terry Teachout's "The New-Media Crisis of 1949," network radio's fate back then has some lessons for today:

* Network TV lost vast amounts of money in its early years. It was only because the existing ­radio networks were willing to subsidize TV that it survived—leaving CBS and NBC at the top of the heap in the '50s and '60s, just as they had been in the '30s and '40s. The old media of today have a similar chance to prosper tomorrow if they can survive the heavy financial losses that they're incurring while they develop workable new-media business models.

* Established radio performers such as Benny and Hope, who embraced TV on its own visually oriented terms, flourished well into the '60s. Everyone else—­including Fred Allen—vanished into the dumpster of entertainment history. The same fate awaits contemporary old-media figures unwilling to grapple with the challenge of the new media (including PPM), no matter how popular they may be today.

* Americans of all ages ­embraced TV unhesitatingly. They felt no loyalty to network radio, the medium that had entertained and informed them for a quarter-century. When something came along that they deemed superior, they switched off their radios without a second thought. That's the biggest lesson taught by the new-media crisis of 1949. Nostalgia, like guilt, is a rope that wears thin.

Radio ended up doing very well for the next half century after that by completely changing everything, based on how people were using it after TV took its at home audience away.

What does your listener still want from you? What problems can you solve for him/her? Many of the problems we specialized in solving yesterday are being solved now by other media, better and quicker, especially when it comes to information elements and the way we've done them for the last 50 years.

Posted by Albright and O'Malley at 7:50 AM

Years ago at a Morning Show Boot Camp I picked up two great things. One was a book (the name I forget), but it was about the experience economy. Give people an experience they cannot get elsewhere to be successful. That lesson is perfect for radio. We need to give listeners something they cannot get elsewhere. Not just prizes (tho that always jumps to mind first, I think), but CONTENT that engages them.

The second thing I picked up was a great line by Les Brown. Used to be's don't make no honey.

I've worked at some great radio stations, but they didn't get great by doing the same thing over and over...they became great by re-inventing themselves and re-thinking how to address the needs of our customers.