Why'd You Have To Be So Mean (Again)?

I stopped paying attention to Bob Lefsetz long before Wired's Brian Raftery wrote last February that Lefsetz's music business career "legend" exists by and large only in his own mind. 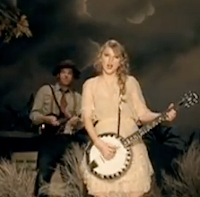 The fact that he got into Taylor Swift's head three years ago to the point that she penned a song about him no doubt made the critical bully feel stronger and more powerful.

So, of course, now he's at it again, inferring that she somehow has "jumped the shark...by playing to everybody has she undermined her core country audience..."

Taylor Swift can work until she dies. She’s had that many hits.
But somehow, with the overhype and move to the middle, she’s torn away some of her underpinnings, she’s become unmoored, we’re no longer exactly sure who she is.  And if we don’t know who you are, it’s hard to stay in love with you.  The little girls may scream, ticket sales may be rampant. But if you don’t see it my way, if you don’t think her career now has more questions than answers, you’re not thinking at all.


I see it very quite differently.

From Hank Sr., to Patsy Cline, Johnny Cash and his brass section, Glen Campbell, The Urban Cowboy fad and its music, to Kenny Rogers, Dolly Parton, Garth, Faith, Shania and may other crossover successes spawned over the years with country roots, they have all been in one way or another been rejected by the country music core audience as their stars ascended.

Yet, all of these artists brought far more fans to country music than the format has ever lost because of their innovations to our art form.

So, Taylor, please don't let the critics get to you.  Be Fearless.

Sure, this year's CMA Awards, as they always do, has moved on to spotlight the very latest, equally-deserving, hot, new artists in our fickle, fast-moving industry, which it seems has somehow gotten the attention again of Lefsetz, who wrote "not only did Taylor get shut out, going 0 for 3, they made jokes about her love life from the stage..."

There will be many more, Taylor.

Richly deserved awards, country music hits for you and jerks like Bob.
Posted by Albright and O'Malley at 12:15 AM

Nashville’s Fall Awards week stands out as an annual yardstick which strives to measure creative excellence. Songwriter/publisher recognitions are mostly chart determined which insures a degree of balance. The CMA Awards however, are plucked from the hearts and minds of the country music industry electorate. The incestuous process swirls with self-interest, but through careful oversight manages to elevate itself each year and avoid most pitfalls. The country industry does however, remain an enigma to most “outsiders.”

When a thoughtful voice like New York Times writer Jon Caramanica peers inside this close-knit community, attempting to chronicle the genre’s movements, his distant perspective sometimes uncovers what some insiders are possibly too close to notice.

Country Nudges Its Elders Away, is an icy splash, but worthy of consideration. “Country is ruthless,” cites Caramanica, “and becoming more so as was clear from the 46th edition of the CMA Awards… their almost complete blindness toward the genre’s past—would have made for a good subplot.” With respect to the musical performances the writer says, “the best showed a creeping rootsminded traditionalism.” He criticizes Swift’s “lightweight song,” “toothless Hunter Hayes,” and Underwood’s, “giant, dull beast of a song.” Interestingly, Caramanica names co-host Paisley as, “a progressive hiding in plain sight.” Saying Paisley’s “Southern Comfort Zone,” “…flips country’s reliance on regional pride into advocacy of travel and broad-mindedness.” Interesting read to be sure. Warning: The article is highly opinionated.