“It’s not my job to overpay for a radio station or to say, ‘You’ve done great, I’m going to reward you by paying more.’”   — JL Media director of broadcast Rich Russo in Inside Radio

IR’s writer opines:  “Improving ratings is often only half the battle. The next hurdle is driving rates in the marketplace. Convincing buyers who were paying $50 a spot to now pay $100 isn’t a slam dunk, even if the station’s ratings have doubled.”

They ran this graphic on Tuesday morning, posing the question about the reality that first the ratings go up and then begins the longterm task of getting the dollars the higher shares appear to justify: 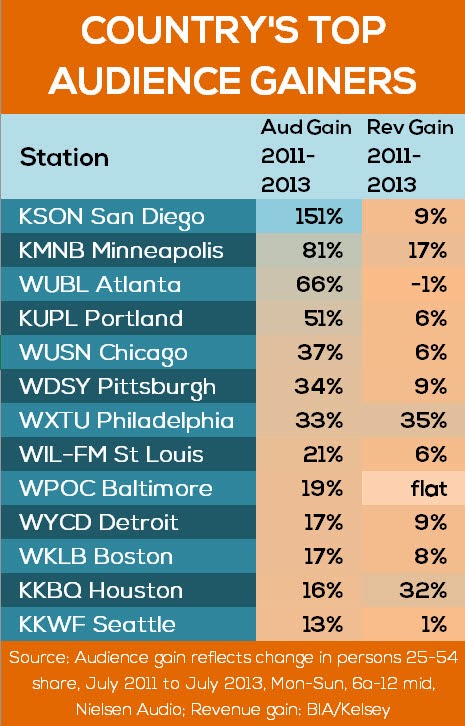 Note:  this chart was updated after I first reproduced it and has now been corrected, with thanks to Inside Radio

This isn't the first time I have written about this (click to read some history from my perspective), but it's obvious to me at least that the increasingly automated cluster selling caused by consolidation that evolved over the past 20 years has created numerous situations where formats with great qualitative stories' power ratios have regressed to the mean.

Big owners have saved lots of money in expenses at the cost of top line growth.

Cuts in the cost of sales at many radio stations and the move to cost-per-point based transactional selling has proliferated as smaller owners attempted to compete and improve their bottom lines as well.

Now that a company has so many stations that they can throw into a pitch from multiple formats to chip away at a market leader's strongest station.

For example, Clear Channel owns seven stations in San Diego, more than twice as many as KSON owner Lincoln Financial.  At the same time, California's economy has not helped any media.

The country format audience share battles in Minneapolis, Atlanta, Portland, St. Louis, Boston. Pittsburgh and Seattle are much tighter than this single snapshot in time would indicate.  That requires a deep understanding of each radio station and the local market history.

Research Director, Inc's Charlie Sislen explains the problem like this:  "If we sell impressions and allow advertisers to treat all impressions equally, then the value of our spots goes down. However, if we position radio as a more valuable commodity, then we can grow our average unit rate and our overall revenue.  We need to continue to sell the value of our medium as a whole, and the value of each of our individual radio stations."


It has been great to see optimistic radio revenue forecasts from both BIA and Borrell, but discrete radio stations and individual formats will fail to achieve their real analog and digital potential until we get back to investing in local and national sales forces who understand the power of every format, have the time and tools to justify their unique value and we stop trying to steal pennies from other radio competition while leaving dollars on the table.

Posted by Albright and O'Malley at 5:18 PM