It's Not Just How Many, But Also Which Ones

In 2000, almost one in five of the average country station's listeners was between 35 and 44.

Is that part of the reason the format's share of 35-44 listeners also dipped from the previous year?

I think it would be if a station hasn't updated its callout screener to account for the generation creep that's been happening over the last decade!

Thanks to Cornerstone Research's Analyst, I compared scores of the best-liked new tunes 25-39 vs 40-54 to show what I mean.  It exaggerates the upper and lower edges of our audience and minimizes the opinions expressed by those right in the middle where we should still be aiming our arrow: 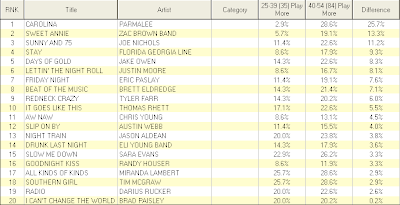 If your station is still doing it that way, it's time to rethink your research plan.  That's especially true if you have moved from callout to online testing to your own station database.

Certainly, looking at the data that way continues to highlight the generational differences between the oldest and the youngest of your listeners 25-54, but splitting 35-44 in half understates their opinions.

That effect is amplified by the fact that if your station mirrors the national averages it's likely that the 20% of your database that was 35-44 in 2000 is now ten years older.  That makes it more important to look at today's smaller 35-44 folks' input on your music discretely compared to the larger numbers on both ends of our demographic scale.

Meanwhile, further complicating today's country targeting is the emergence of 18-24 and even teens into our cume (and music research).

Who wouldn't want as many younger listeners as possible?

I want to consider some challenges that presents - and solutions - tomorrow in this space.
Posted by Albright and O'Malley at 7:32 AM

Let's not forget that the country format doesn't exist in a vacuum. Virtually every format targets 35-44 and 60% (or more) women. Your demo shift is a solid issue for country radio to deal with. And, I couldn't agree more that 25-54 (or 18-54) is a family reunion not a demo target. - Bob McNeill