It's worth studying both Census Bureau population projections as well as Nielsen's annual Radio Today historical trends to stay ahead of the curve. 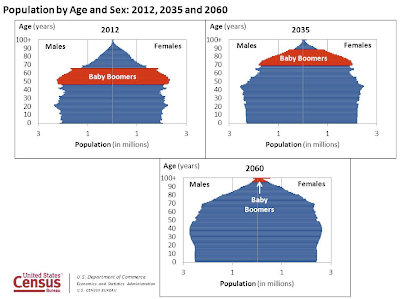 More than half of the country radio audience today is over 45.  The country radio format's 35-44 composition percentage has been slipping for the last decade as Gen X has aged into that demo cell right in the center of our target.  (click the link to see Westwood One/Denver VP/Programming John Paul's prescient post and stats on this)  "It could get real ugly" between now and then, he says. 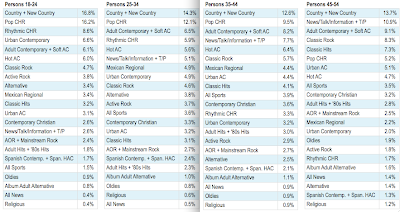 Last week, Inside Radio talked to a number of smart programmers managing to beat the national averages:

So, what's the big deal?

To overcome the smaller proportion of 35-44 in both the general population and country's audience comp, the format must increase it's share of both Generation X and Generation Y listening above current levels.

The majority of country stations tracked by Nielsen this year cut a smaller slice of a shrinking pie.

Turning that slight dip around by the time the next annual format report emerges in 2014 will lay the necessary groundwork for both a solid medium- and long-term future.

Failing to do so will mean we'll need to wait for the average age of 18-49 and 25-54 to come down, which census data forecasts won't happen for a decade.

Getting it "right" between now and then requires targeting more discretely than the standard ten year demo cells, growing new coalitions based on more than the mix of age or gender that worked for the format in the past.
Posted by Albright and O'Malley at 5:33 AM