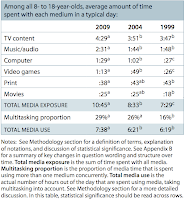 The transformation of the cell phone into a media content delivery platform, and the widespread adoption of the iPod and other MP3 devices, have facilitated an explosion in media consumption among American youth. players.

A national survey by the Kaiser Family Foundation found that with technology allowing nearly 24-hour media access as children and teens go about their daily lives, the amount of time young people spend with entertainment media has risen dramatically, especially among minority youth. 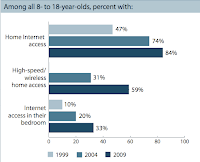 ear-olds devote an average of 7 hours and 38 minutes (7:38) to using entertainment media across a typical day (more than 53 hours a week). And because they spend so much of that time 'media multitasking' (using more than one medium at a time), they actually manage to pack a total of 10 hours and 45 minutes (10:45) worth of media content into those 7½ hours.

Generation M2: Media in the Lives of 8- to 18-Year-Olds is the third in a series of large-scale, nationally representative surveys by the Foundation about young people's media use. It includes data from all three waves of the study (1999, 2004, and 2009), and is among the largest and most comprehensive publicly available sources of information about media use among American youth.
Posted by Albright and O'Malley at 3:20 AM

Five years ago, Kaiser reported that young people spent an average of nearly 61/2 hours a day with media, and managed to pack more than 81/2 hours worth of media content into that time by multitasking. At that point it seemed that young people's lives were filled to the bursting point with media.

As of today, says the report, those levels of use have been shattered. Over the past five years, young people have increased the amount of time they spend consuming media by an hour and seventeen minutes daily, from 6:21 to 7:38, almost the amount of time most adults spend at work each day, except that young people use media seven days a week instead of five.

Even w/all the music services the experience of hearing a song "on the air" on radio is unlike any other. The community experience of listening to what's being said and the surprise of what is being selected musically can't be undervalued.