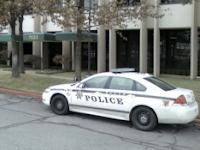 Keith Berman has it right: A troubled person, armed with a gun, makes his way inside your inner sanctum and demands to see one of your personalities. How would you react?

Sometimes, it takes a close call like this to remind our readers to please review your own safety regulations and security procedures so that a dangerous situation like this can be avoided at your station.
Posted by Albright and O'Malley at 6:17 AM

Thanks, Jaye! I can't claim credit for that line, though -- my partner-in-crime Kevin Carter was the one who wrote that item.

But it's a compliment regarding how well we work together that our writing is seamless to the point where people can't tell which one of us did what. :)

I've been involved in a few close calls.

In Tacoma, a crazy man bashed his way into the studios and smashed the joint up. He was angry with something concerning our sister AM talker has b'cast and thought we were that station.

In Akron, an angry armed man rushed through one of our stations, looking for his soon-to-be ex. No shooting but nervous.

In Cleveland, the FBI visited me to tell me of a psychotic woman calling them to say I was bugging her bedroom, knew her thoughts, etc. They said they knew she was armed but at that point could only advise me.

Needless to say, I was pretty nervous. For a few weekend shifts (when I was alone) I tool a shotgun in and propped it against the wall.

But I liked your chalk remark. I love this country and feel blessed to be an America. But if the day arrives when most of us are armed on the streets, I'll seriously think about leaving.

This isn't the place for a 2nd Amendment discussion and I'm not learned enough to argue the case but I can't imagine the Founding Fathers imagined all of us walking around with Glocks strapped to our hips.

I got one. Many years ago while working the overnight shift I got a call from a woman who was CERTAIN she knew who the Green River Killer was. She had specific information, names, dates, times, body locations…all this details. Was afraid for her life, etc. I rolled tape on the call. Afterwards I was SO disconcerted that I contacted the police. Within the HALF HOUR two people from the Green River Task Force were at the radio station wanting the tape. As far as I know it’s in a box somewhere in the King County Sheriff’s archives. I got a follow up phone call a few weeks after that at home from the task force and that was it. Never heard from the caller again.