This week's Billboard Top 40 Midweek Update had a fascinating Rich Appel overview of SoundOut, HitPredictor, RateTheMusic and Mscore, spotlighting the many research tools available to programmers these days.
Thanks to Bullseye Research and Billboard, the country format gets a weekly look at both callout and listener database online test data and, due to the format's high proportion of heavy users compared to the pop formats, the differences between the two doesn't seem to be driven by the age of tunes. 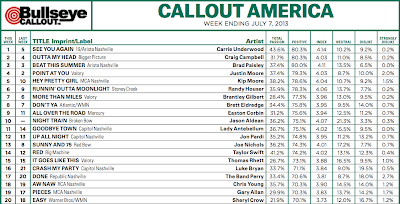 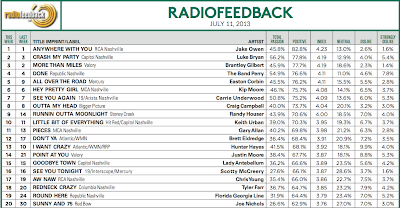 The #1 song in the callout is 15 weeks old (Carrie Underwood), whereas the top one in the online poll was 27 weeks (Jake Owen).

The average number of weeks of national airplay of both top 20 rankers is practically identical.  Callout = 19.25 weeks vs database = 19.75 weeks.

There are differences between the two music test methodologies, but I think they reflect more the nature of country station loyal listener club members compared to the more random characteristics of country radio users reached by phone and their preferences than merely how long a typical song has been exposed.

Conclusion:  there are more research tools available today and a programmer would be getting only a part of the picture if she or he didn't look at all of them.
Posted by Albright and O'Malley at 5:31 PM