I had watched him on TV while I was in school, so it seemed like a big celebrity was coming to help us relocate our studios and transmitter when my General Manager (Bill French) at KTBT-FM, Orange County first introduced us to Joe two decades later.

We were changing the brand to KORJ and the format to AC.  This was a few years before that 94.3 frequency and I both went country. 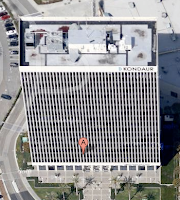 The owner sent Portrero in to handle oversight of the site selection and construction project.  The biggest challenge he faced was to navigate all the hurdles of putting a transmitter, tower and antenna atop an existing building at a reasonable price.

Engineering consultants and the traditional broadcast tower installers were proposing extremely expensive projects that had little chance of getting zoning approval.

It was then that Joe came up with the idea of adding a free-standing flag pole to the top of the building which would be sturdy enough to hold an FM antenna too.

It got the job done and it was amazing to watch on a Sunday morning as a helicopter lowered it into place, looking very nice and at a cost that was far lower than the professional tower experts ever thought would be possible.

When someone tells me something simply can't be done, I am grateful to Joe Portraro.

It simply means you haven't considered enough possibilities ... yet.
Posted by Albright and O'Malley at 10:08 AM