Just as there myriad stories for every light on Broadway, there are more than a million ways radio came through during Hurricane Sandy.

PPM seems to have delivered while Nielsen meters didn't.


During the arrival and immediate aftermath of Hurricane Sandy last month, those with power looked to television, the Web and social media for information. But large numbers of people, particularly those in the hardest-hit areas, also turned to the radio.

Arbitron, the radio ratings service, will report on Monday that from 7 p.m. to midnight on Oct. 29, when the storm made landfall in New Jersey, an average of just more than a million people in the broader New York region were listening to the radio during any 15-minute period. That is up 70 percent from the same period the week before. (Besides the five boroughs of New York City, the metropolitan market includes five counties in New York, nine in New Jersey and part of one in Connecticut.)

The audience skyrocketed in coastal areas. Stamford and Norwalk, Conn., had a 367 percent increase during that period; in New Jersey, that figure was up 247 percent in Monmouth County, and up 195 percent in Middlesex, Somerset and Union counties. These numbers increased even though some stations, like WNYC and WINS, lost their AM frequencies yet continued to broadcast on FM. 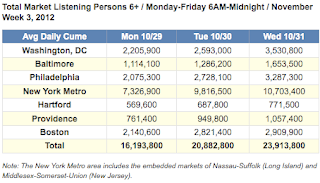 
"We know that radio consistently reaches 93% of all people aged 6+, but the storm-driven shift in listening only reinforces how well established our medium is in listeners’ minds. The data shows that listeners of all ages turn to radio when they need the latest information about their communities. When people living in the path of Sandy needed updates, they kept the radio on by tuning to their trusted sources, no matter what the format." - Jon Miller, Director of Programming Services at Arbitron


It was an unprecedented event for an area of the country that is home to a sixth of America’s population, but the fact that once again radio was there for so many people is not unprecedented at all.

We're all getting busy right now to assist with the next emergency, where ever and what ever it may be.