Time To Toss Borrell's New Report In The Trash?

My first look last week at "The Future of Legacy Media: With 5 Years of Digital Disruption Ahead, What Happens Next?" set my hair afire. 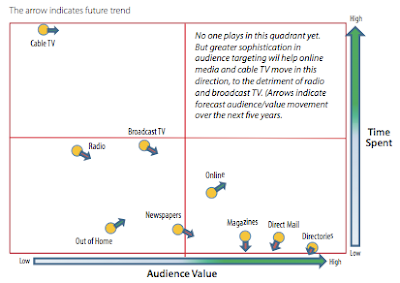 Nice chart, but the researcher seemed to ignore radio's move to PPM measurement five years ago as a possible cause in "time spent" going down!!

They completely missed, it seems, that the move also helped radio's reach more than double as "phantom cume" was finally accurately captured with the evolution from memorability measurement to actual usage.  Borrell equates "value" with "time spent," ignoring other factors like radio's cume growth and very competitive cost.


Medialife's Diego Vasquez read it last week and recaped radio's headline:  As long as cars are made with radios, there won’t be much decline in radio industry ad volume, but there won’t be much growth either. Unless the federal government decides to grab bandwidth, the industry will stay about where it is for at least the next five years.


Now that an appeals court has struck down the FCC's Net neutrality rules, Borrell had better rethink their forecast.

Analog radio and IBOC digital radio:  while we all wait to see how much the giant companies who control our digital bandwidth want to charge everyone for it, legacy audio media's slogan for now and the foreseeable future remains "listen all you want... it's free."
Posted by Albright and O'Malley at 1:39 PM

A federal appeals court opened the way for broadband providers to charge content companies for faster speeds, striking down federal rules that had required equal treatment of Internet traffic. Click my link for a PDF of the ruling, and what some of the key passages mean.