Country Music Radio Has About Ten Years (Before It Falls Off A Cliff!) 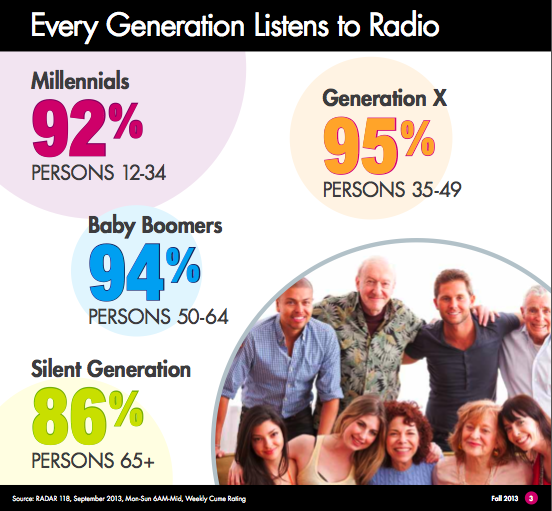 For the coming decade the prospects of the country format look extremely bright:  very solid with 15 and up and as long as we can continue to forge a passion-driven coalition between Millenials, Gen X and the Boomers we should experience stability and 18-34 growth (graphic from Nielsen Radio Today 2013).

We will hit a demographic cliff as the large group of folks who are under 15 today that Frank N. Magid Associates started two years ago to call "The Pluralist Generation." 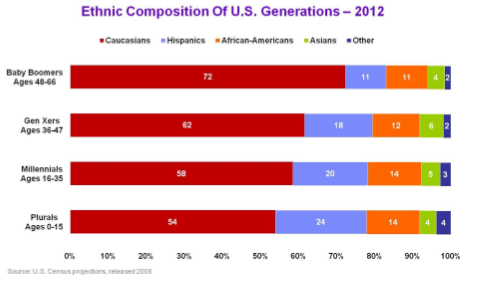 While no one knows exactly what will happen in the next 20 or 30 years, Magid's research (click for a pdf executive summary), coupled with current events and societal factors, allows us to project significant societal trends that will play out. 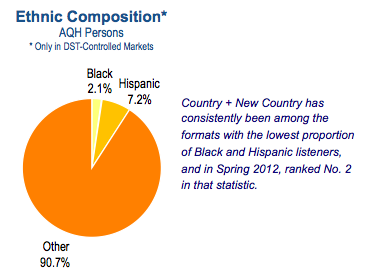 Today's country audience is anything but ethnically diverse.

Inevitable change is the founding reason Plurals is the right name for this generation.

It’s not just relevant to what’s happening in society currently, or how they are as children now,  the name Plurals reflects what lies ahead, for them, and all of America.

Plurals, as members of this generation will be known, are: 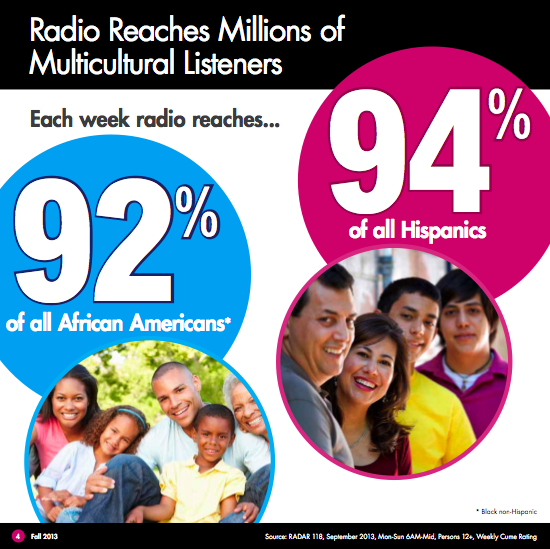 The group-oriented style of Boomers reversed the latchkey kid trend with an unprecedented focus on the well-being of Millennial children at large (e.g., the development and implementation of after- school programs).

The current transition to the individual-oriented parenting style of Xers is chronicled is today’s headlines (e.g., parent trigger laws and picketing schools about peanut allergy policies).

Male and female Plurals seem to be already affected by this environment.  Girls aged 8 to 15 have greater expectations in obtaining a college degree, helping others live a better life and changing the world.  They care more about their grades at school and getting feedback from parents and teachers to help them do things better. 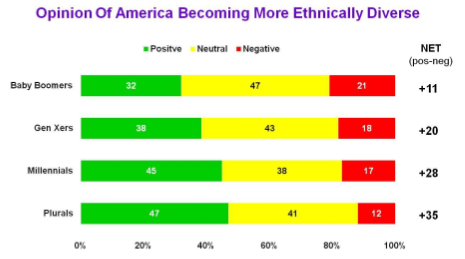 How will the rise of the public, crowd-sourced voice affect the way Plurals view mainstream media sources?

Will their openness to diversity create demands for more diverse representation in programming and advertising?  Will video content piracy wars (e.g., SOPA) be their equivalent of what Millennials experienced with music (e.g., Napster)?

Will the easy access, even by the youngest Plurals, to devices that enable fast and continuous communication change the way they learn to communicate?  As the Communication Lifestyle spreads and is adopted by young Plurals, will schools and businesses have to make accommodations?

They, as have generations past, will bring changes in Education, Religion, all Media and Business, Communication and Politics.

FAST FACTS:  The Pluralist Generation, a.k.a. Plurals
* Magid Generational Strategies™ has not yet determined the ending year for the Pluralist Generation.  Societal factors arecurrently being evaluated and birthrate data for 2010, 2011 and 2012 is not yet available.  An improving economy and an expected rise in birthrates will likely signal the start of the next generation – and end of the birth of Plurals.

Country programmers have roughly a decade to learn about what Magid terms "The First Generation Of The Twenty-First Century."

Unless we get it right, it's likely that as those young folks come into our target horizon, the cohesiveness between today's country youth and our 45+ cells will start to break down driven by polarity over diversity issues.

This is yet another reason to begin to focus now on relating universally, understanding and engaging Millenials and Gen X while at a point in generational history when we have the luxury of the strong TSL of Boomers too.
Posted by Albright and O'Malley at 11:55 PM

At a time when broadcast radio is increasingly challenged for younger listeners, there's good news for radio from younger Country fans. Those 12-to-24-year-olds who say they listen frequently to Country music are significantly more likely to have listened to FM radio in the last week than the 12-to-24 demo overall. But 12-to-24-year-old Country fans are also more likely to use other types of audio as well.

Edison Research's "Understanding Country Radio's Next Generation of Listeners" is the newest
research on the music and media habits of 12-to-34-year olds. The full survey will be unveiled February 19th at the Country Radio Seminar in Nashville by Edison's Larry Rosin and Megan Lazovick, along with Jayne Charneski, an expert on "Millennials." A follow-up session will be held February 20th.