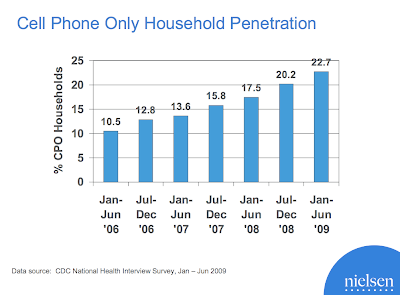 Radio-Info's Tom Taylor was in the room at CRS to cover the debate Friday morning: 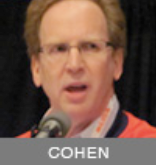 Arbitron research guru Dr. Ed Cohen says at a “Gloves are off” session with Nielsen’s Lorraine Hadfield that they’re not seeing any big differences in the overall scheme of things. And that the hallowed “regression to the mean” principle suggests that ass more and more Americans take to depending on their cell phones, “they look more like” landline-only households. (Though one CRS convention-goer points out that means that there might have more differences in the past, as those cellphone-hugging 18-34s remained hard for Arbitron to reach.) 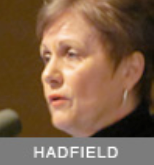 “Cell Phone Only shows significant difference by format.” Nielsen’s Lorraine Hadfield holds a very different viewpoint from Arbitron on the subject. She’s there to talk about Nielsen’s “large, reliable samples” and its emphasis on what researchers call “address-based sampling.” “ABS” is a major point of difference between how Nielsen and Arbitron create their samples. Hadfield says the Nielsen approach produces “98% market coverage.” Cohen says “Our coverage, at worst, is about 93%, and Nielsen’s probably about 95%.” Hadfield prefers eight-week surveys with very large samples, mostly once a year in current practice. While in its own diary markets, Arbitron does two 12-week surveys. 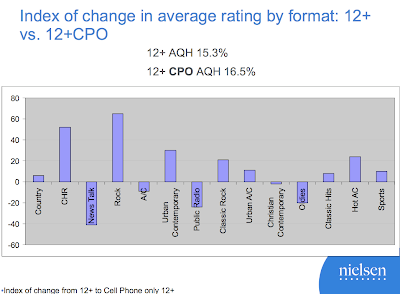 Hadfield notes that country radio did very well in the 51 markets they surveyed last spring: 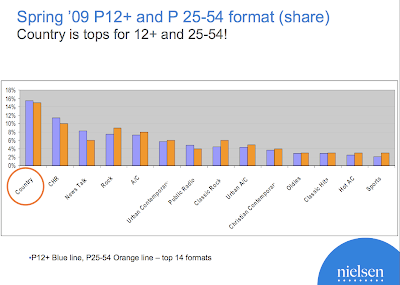 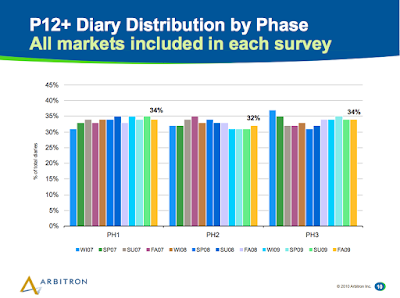 If your local market didn't look that nifty, you may want to ask your ARB rep what the difference might mean for the accuracy of your book.

Cohen outlined the diary survey changes being made this spring:

Posted by Albright and O'Malley at 2:40 AM

It showed that 10 of 12 formats had no AQH change by the addition of cell phone only households to its diary sample, while rock had a 10% increase and news/talk a 5% decline.