My blog last week (Country Fans & Republicans) reflecting on the headline of researcher Mark Kassof's latest national "Listener Think" study (Country Fans: Born This Way?) and the fact that after all the great new country music of the last five years the largest group of our listeners proved to be what seems like the same folks who have been listening all their lives made me feel a bit like Reince Priebus, Karl Rove, Ralph Reed, Frank Luntz and other leaders of the Grand Ole Party who are juggling expectations of a life-long-loyal core with their own hopes, attempting to grow their pie.

I took solace in the latest CMA Insider Panel research showing how active, youthful and family-oriented our users are, but also asked Mark to crunch his numbers to see what was there below the headline picked up last week by the trades.

He was kind enough to do so: 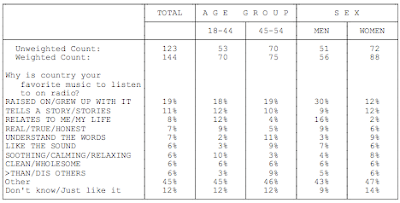 Some observations on his data from Kassof:

As strong as country radio's ratings are, it still has more room to grow by leveraging the music's relatability and power to keep building appeal among men and younger listeners.
Posted by Albright and O'Malley at 7:10 AM