It will take many days to fully digest all of the findings released yesterday by Arbitron, Edison Research and NPD Group, but one thing is already obvious.

Thinking about many research reports one at a time won't give you the full picture of broadcast radio's place in media usage.

As yesterday's post proposed on an entirely different set of info, before you make use of any research findings you didn't pay for, it's important to understand who did pay for each study and what their motivations are.

For example, this chart from NPD's “Music Acquisition Monitor:"

As Tom Taylor notes in his report of the study: "That headline needs a bunch of qualifiers – like the age of those “younger Americans” (13 to 35) and the fact that the 23% figure relates to music listening, not total listening to radio and/or other audio sources."

Arbitron's Bill Rose and Edison's Tom Webster were quick today with insightful recommendations in their recaps of Infinite Dial 2013, so I simply want to share the following chart from it through which I think we need to view the NPD data: 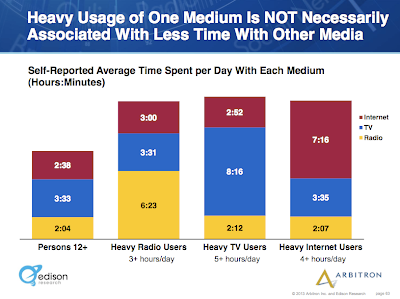 Certainly, not many people use their two ears to listen to two separate audio sources at the same time, but that's about the only form of media multitasking that isn't going on - and growing - now.

The strength of "radio" is that it's available to use while you're doing other things.

Simultaneous media usage is our future.  It's no longer a zero-sum game.  You need to look at as many data points as possible to get the full story.

Heck, even the word triangulation has more than one meaning.
Posted by Albright and O'Malley at 2:54 AM

BIA/Kelsey, concludes that "... as the digital advertising marketplace continues to rise... radio is improving its listener engagement online... the industry is still recognized as an important part of the media mix... rising slightly with the rate of inflation... but not keeping up with the economy... "

According to the first edition of “Investing In Radio Market Report,” from BIA/Kelsey, radio industry over-the-air revenues inched slightly upwards in 2012, increasing to $14.3 billion, a 1.5% change from the year before. That slight change is due in large part to the sluggish overall economy for 2012 and the increased competition radio faces in the local media market, says the report.

The company also notes that station revenue mix will continue to shift somewhat and income from online advertising is expected to rise at a rate of about 10.8% annually over the next five years versus 2.5% from over-the-air. For 2013, BIA/Kelsey forecasts over-the-air radio revenues should see 2.3% growth, or $14.7 billion, again due to the slightly stronger economy.