“This is an unjust system that must be changed.” -- Lee Thomas Miller, songwriter/president of Nashville Songwriters Association International

I read the Peter Schweizer book "Extortion," so don't blame me for thinking that perhaps "here we go around again."  Last week’s House Judiciary Committee hearing was probably just another turning of the usual wheels.  Sound Exchange lobbies its friends and one-sided meetings are held in the chambers of Congress.  So, the NAB lobbies radio’s friends in Washington.  And, for yet another year, hopefully from radio's perspective a bill gets sidelined after more hearings are dutifully held.

A second music licensing hearing is scheduled for June 25, with witnesses from ASCAP, the radio broadcasters, record labels and others, as well as Rosanne Cash.

I think I know where she stands and I'll bet you know where I do.  It’s happened so many times over the years that it’s easy for both sides to get complacent.  If that happens and one year "opposition" (lobbying) doesn’t step up, legislation could actually pass.  Which is why it's more than a little comforting to see Cox now join several major radio groups in a direct deal with a major Nashville label.  A change in the political routine will be welcome and hopefully more reasonable heads are starting to prevail.

Both sides could recognize that there’s a reasonable, fair middle ground that may settle the matter for once and for all.

At least I did, until Michael Huppe at the New Music Seminar dropped a bomb, rhetorically asking "if FM radio went away tomorrow, would music sales go down or up?” displaying a chart that purported to show FM radio hurts music sales.

If he had admitted labels were asleep at the switch back when RCA owned Napster, peer to peer file sharing hurt music sales and then they gave a third of each sale to iTunes, he could have built some credibility with me, but FM radio?  Huh?  Trying to rewrite history by distorting facts makes it seem like he's not serious and not a win-win!

The CMA has plenty of genuine research on all sorts of country music consumer bahavior including this from several years ago, directly contradicting that assertion with country radio fans, for example: 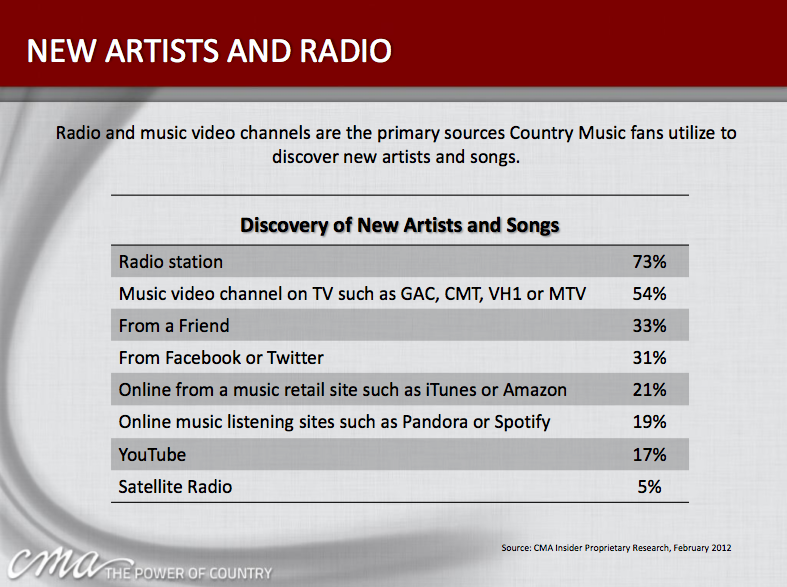 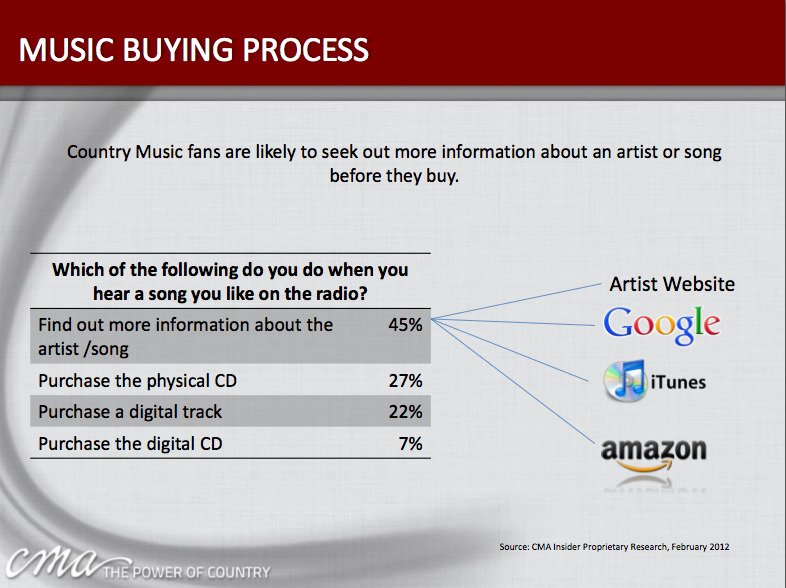 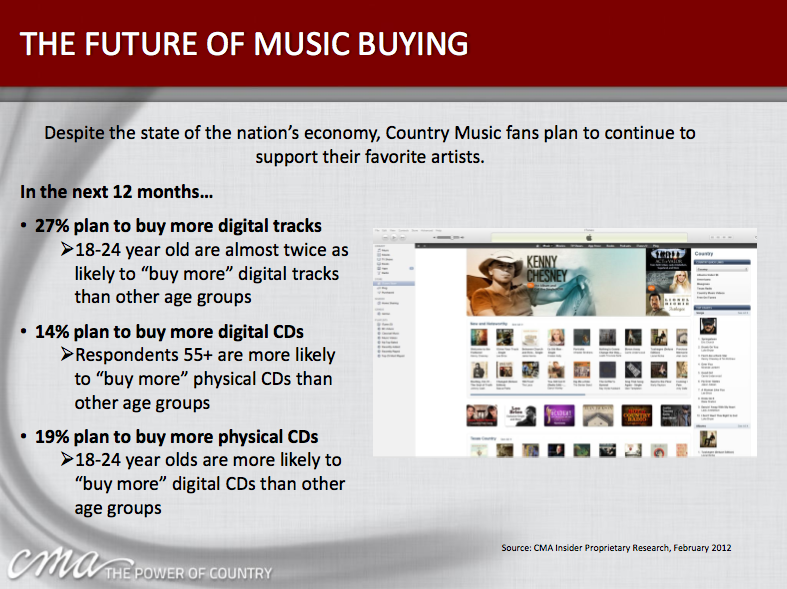 For my entire career, I worked as though radio, artists, labels, publishers and anyone who makes a living from music were all in the same business, promoting one another's best work.

Creating new music hits is good for all of us.  Radio listeners hear them and buy 'em.  It's been that way for what seems like forever.

I know it, and so does anyone who follows the money in the music industry does too (I hope).

NAB probably has even more recent and relevant charts.

In the upcoming hearing, someone will doubtless ask the music industry what percentage of their marketing budgets are spent on pursuing radio airplay.  Maybe they will even have some fancy graphs to show those millions that could be saved by promotion and marketing departments if it ever failed to drive sales.

After it's revealed what a large and still-productive number that is, someone should explain to Huppe that radio and the music business work best as a team.  Tearing that long-standing partnership apart with patently self-serving exaggerations won't be good for either music professionals or radio.

Artists and labels can make much more money from selling their hits, merch and concert tickets by use of radio as partners in promotion than they can distorting facts in order to sell music licenses.
Posted by Albright and O'Malley at 6:59 AM

The attitude of the music industry invariably seems to be that people are stealing their works of art, and that all broadcasters are big fat thieves who ought to pay more.
Invariably left out of grand debates between music producers and broadcasters is the unique position of us non-commercial broadcasters.
As a small NCE station manager, it's amazing how often I get pleas from record companies and artists, especially new musicians, desperately needing some airplay and promotion, hoping to get known, so they can “sell” product and get paid. Sorry, but I have no sympathy.
Especially are LPFM stations penalized by the present system. For most of them, over 50% of their annual budget is sucked up by music rights fees!
As a non-commercial broadcaster, the world of commerce is outside my realm. While everybody is in it for the money, and makes money, we legally can't, and don't want to. Most non-commercial stations barely survive on donations.
My question for lawmakers and challenge to the music industry at all levels is: "why should I be paying YOU to promote YOUR commercial product on MY non-commercial radio station?"
As I see it, YOU should be paying ME to play and promote your products. But, of course that's called "payola" which is illegal.
An equitable win-win arrangement would involve no exchange of money. The non-commercial broadcaster should “pay” for use of music by promoting it... that is, announcing the title and artist each time it's played.
You produced, we promote, you sell, and we survive.
Nothing more, nothing less, nothing else makes any sense.