Country Radio Got Run Over By A Reindeer

Inside Radio says "some Christmas gains come at country’s expense" in the latest PPM monthlies, and there's no denying that Country female fans, especially, love those Holiday tunes (as an Edison Research study for CRS-2009 indicated). 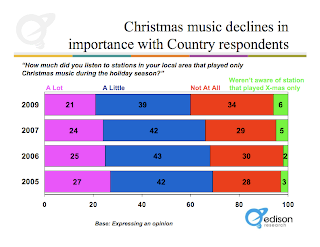 Interest may have been declining over the years as more stations have branded as "all Christmas," but it was still as 60+/40- game this last time the tactic was studied nationally.

In Seattle, Minneapolis, Phoenix, Denver, Detroit, St. Louis, Atlanta, Chicago, Dallas, Houston, both country stations were down as Christmas music was up.

In the six PPM cities with only one country station as of yesterday, four also suffered clear-cut losses - Philadelphia, Baltimore, Washington and Los Angeles - while two - San Diego and Miami not so much.

Miami, of course, had no Christmas music station this year.  In San Diego, KSON was down 6+ (5.9-7.2-6.0) but retained it's #1 market rank in spite of KYXY the all-Christmas station gaining on them a bit.

The one country station to go all Christmas, Wilks' KFKF/Kansas City exploded as a result of the Holly Jolly, 5.2-7.1-9.2 6+ in the last three monthlies.

It's not possible to make iron-clad conclusions on 16 such disparate markets, but it seems at this point to look like:
One thing for sure:  hat's off to the Lincoln Financial/San Diego crew for a great performance in the face of solid Christmas tunes in 2012.
Posted by Albright and O'Malley at 2:29 PM