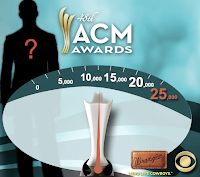 The ACM Awards just kicked off a “Tweet to Unlock” campaign via social media, inviting music fans to tweet 25,000 times to unlock the 2013 ACM Awards date and host announcement!

They have released a short video of already-announced ACM Host Blake Shelton talking about the search for his new, mystery co-host.

The ACM says, "The sooner fans reach that 25,000 tweet mark, the sooner we will release the show information – it could happen over the weekend or early next week, by our estimate."

I think this is an inventive way to get passionate country music fans to help create memes and lots of early buzz for the annual spring event. 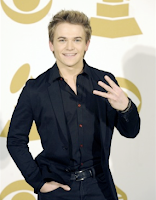 Meanwhile, Billboard reports that the Grammy Awards Academy seeking to shake its reputation as an organization that had become staid and retrograde began a social media makeover in 2010 with a user-powered, YouTube-centric promotional campaign branded "We're All Fans" which helped the ceremony that year net its highest ratings in seven years.  "For this year, the Academy is peeling back the artifice of the awards themselves, the new campaign, dubbed "#TheWorldIsListening," is its own democratic platform (shown, Hunter Hayes photo by Erika Goldring/WireImage.com).  Amateur musicians from around the world have been invited to upload their own recordings to a special site on SoundCloud where viewers can go to discover and share what they like."

The Grammys democratic?  Since when?

That's going to be very interesting, since for country radio fans, past Grammy winners have pretty much been head-scratchers, more eclectic opportunities for musicians to give credit to artistic endeavor than commercial success or popularity.

They can save the trouble.  I can tell them that.

A bit of that "democracy" from the Grammy social site by Rob Mitchell of Thousand Oaks, California:


"I think the Grammy's really missed the mark this year in terms of nominating Best Country album of the year --- there is no question that Jason, Carrie, and Luke put out quality albums out during the last year all featuring muliple #1 songs, great singing, lyrics, and arrangements that are really at the top of artistry today.  Its so frustrating that someone like Jason, Luke or Carrie put their heart and soul into making AMAZING albums with NO filler year after year but seem to get snubbed for some reason."


Country radio and its fans would settle for a country hit that got significant airplay on the radio last year winning an award in the country category for a change.

Hopefully, they're listening as well as talking in their experiments in social.

Posted by Albright and O'Malley at 3:51 AM