A Different Way To Look At It

I have a number of clients which use Pinnacle Media Worldwide's Online Tracker to test currents and their software permits an interesting analysis of currents that I hadn't seen elsewhere.

But, since so many perceptual studies over the last several years with country fans have found repetition to be a major complaint, Pinnacle's program now asks listeners if they'd like to hear a specific song "less" or "more" as well.

So, are radio listeners saying that we play currents too much for their taste?  I ranked this report which combines the opinions of more than 300 25-54 country fans (65% female/35% male) using Online Tracker by "play less." 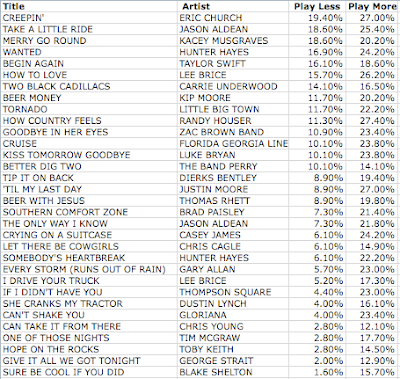 Not a single song of the 32 tested in the last seven days had more folks saying we should be playing it "less" than wanted to hear it more!

Here's how I read it:  "too much repetition" doesn't seem to me that you play songs too much.

It means you play songs, styles, eras and genres I don't like too much.
Posted by Albright and O'Malley at 5:44 PM

This is really good insight. While the repetition/burn issue is a challenge, I believe that we often over think it. Leave it to Jaye Albright to provide some common sense. Thanks, Jaye!